On the Rights of POWs 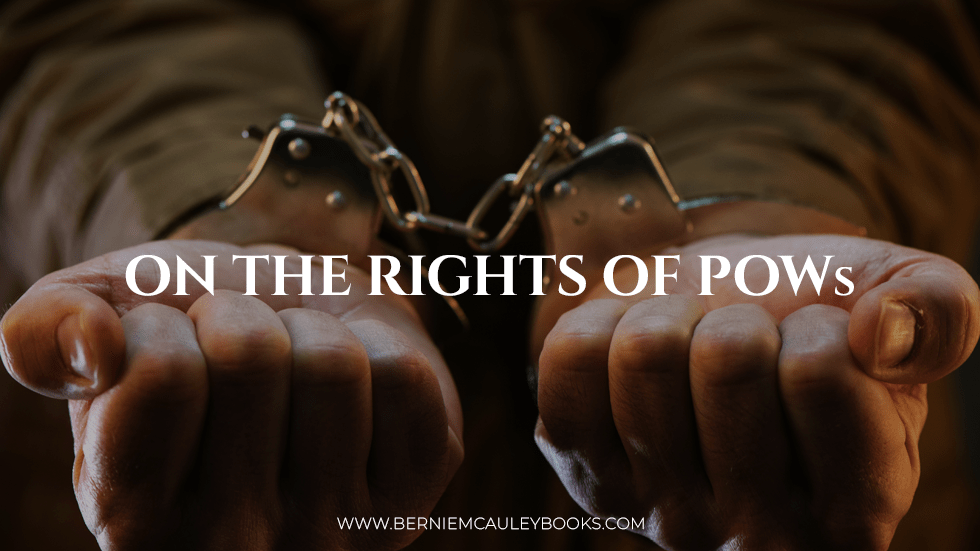 For as long as war exists, there will always be prisoners. From ancient times to the middle ages, the fates of these prisoners of war would often always result in death. A few may experience slavery, which some refer to as a fate worse than death. The modern era, though less harsh, would still be unbearable. It is, after all, human nature to seek for and long for freedom. Even then, life outside could be very different once these prisoners of war are freed and repatriated. The world stops for no one, not even those captured by senseless war. As such life of the prisoners of war, like the POW’s life on Bernie McAuley book, The Shadows of Sawtooth Ridge is unenviable and unimaginable without the different historical accounts and media about them.

It is stated in the above paragraph that the life of a prisoner of war in the modern era, though still unbearable, is less harsh. This is because of the different treaties and conferences between several nations agreeing on the necessity to give prisoners humane treatment and prevent more unnecessary loss of life in wartime. This amelioration of the treatment of soldiers captured during wartime started during the Brussels Conference of 1874. These talks were not in vain. One of these fruits was Chapter II of the Annex to the 1907 Hague Convention IV – The Laws and Customs of War on Land. On it were the details covering the treatment of prisoners of war. These provisions were then expanded and revised by the different Geneva Conventions. First was in the 1929 Geneva Convention on Prisoners of War or the official name: Convention relative to the Treatment of Prisoners of War, Geneva July 27, 1929. This is a version of the Geneva Conventions that covered the treatment of POWs during World War II. The Third Geneva Convention in 1949 revised a lot of these provisions. One primary provision included in the convention made torture illegal. It also states that the only information a prisoner needed to declare would be their name, date of birth, rank, and, if applicable, their service number. These provisions apply from the moment whenever a participating and legal combatant is captured and ends until the said combatant is released or repatriated.

That said, the treatment of prisoners may still vary and, depending on the country, could range from severe to excellent. This could be observed during World War II, one of the first international conflicts that broke out after the ratifications of the Geneva Conventions. The Allied forces like the United States and Great Britain generally followed the conventions stated agreed in the Geneva and Hague Conventions. Meanwhile, Germany responded in kind for their French, British, and American prisoners while treating their Red Army prisoners as well as Polish and Slavic prisoners with almost barbaric ferocity. The German military justified this with the refusal of the Soviet Union to sign the Geneva Conventions.

So what qualifies as prisoners of war? The Geneva Convention states that the captured individuals must be lawful combatants. These lawful combatants include the armed forces of a Party to the conflict and the members of militias or volunteer corps forming part of their armed forces. These forces must be commanded by a person responsible for his subordinates. They must have a fixed and distinctive sign recognizable from a long distance, and they must be carrying their arms openly. Finally, they must also conduct their operations following the laws and customs of war. Inhabitants of a non-occupied territory can also be considered if they take arms to resist an approaching enemy spontaneously. As such, Uniforms, insignias, and badges are crucial in determining the prisoner of war status. This also makes it so that saboteurs, spies, and mercenaries, among others, are not treated as legal combatants. They, however, may have rights under the Fourth Geneva Convention.

So, what rights do the prisoners of war enjoy? Well, under the Third Geneva Convention, POWs must be treated humanely. There is no need for prisoners of war to give any information except their name, age, rank, and service number. They are also given the right to inform their next of kin and the International Committee of the Red Cross of their capture. Their rights also include the chance to communicate with relatives and receive packages and adequate basic human needs (i.e., Food, clothing, housing, and medical attention). These prisoners of war should also be paid for any work done under captivity and not forced to work in dangerous, unhealthy, or degrading situations. Finally, should the conflict end, these prisoners should be released quickly and swiftly.

Breaches in these rights would mean punishment for the responsible party. The Nuremberg trials, as well as the Tokyo trials, are examples of these punishments where German and Japanese military commanders were held accountable for the war crimes they had inflicted. Most of those found guilty were sentenced to life in prison or executed.